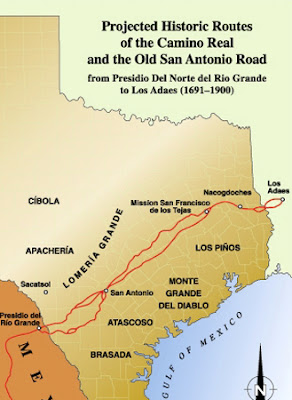 
During the Spanish colonial period in America, the Spanish established a number of  royal roads, which tied far-flung regions with Mexico City. One of these was El Camino Real de los Tejas, also called the Royal Road, the King's Highway, the Old San Antonio Road, and the San Antonio-Nacogdoches Road. The ever changing 1,000-mile trail provided the only primary overland route from Mexico City, across the Río Grande River to Los Adaes, the first capital of the Texas province, in present-day northwestern Louisiana. Other caminos reales were also established by the Spanish including the mission trail up the coast of California and the road from El Paso Texas to Santa Fe and Taos, New Mexico known as the El Camino Real de Tierra Adentro.

Not every route used by the Spanish during their exploration and settlement of New Spain met the requirements for designation as a camino real. Caminos reales were routes that connected economically important Spanish towns, capitals of provinces, and mines that possessed charters conferring royal privileges.

Following established Indian trails and trade routes, it was first blazed by several Spanish expeditions in the late 17th Century to connect a series of Spanish missions and posts. It was also developed to confront and counter French and English intrusion into the northeastern frontier of the Spanish borderlands. Settlements that formed along the road were among the state’s earliest cities and communities.

The blazing of the trail was the result of three expeditions. In 1690 Alonso De León led his fourth expedition into Texas, with the objective of establishing the short-lived San Francisco de los Tejas Mission in present-day Houston County. The next year, Domingo Terán de los Ríos, the first provincial governor of Texas, crossed the Rio Grande River taking additional missionaries to the East Texas missions. Following much of the same course traveled by De León, Terán diverted his path to send a party to Matagorda Bay to meet supply ships. In 1693 Gregorio de Salinas Varona proceeded directly from the Rio Grande River to the East Texas missions, further defining the course as a direct route.

Though sometimes thought of as a single road, it is more accurate to describe the El Camino Real de los Tejas as a network of trails, with different routes used at different times. Numerous feeders branched off the main course and other segments didn't appear until much later, with the trails coming together at San Antonio and Nacogdoches, the only two population centers in those early days. The trail also varied due to flooding and Indian threats.

The route between Rio Grande River and San Antonio gradually shifted southeastward over time, due to threats by the Apache and Comanche tribes. In the beginning, it was almost exclusively utilized by Spaniards moving northeastward serving as a lifeline for the missions, as a trade route, and a cattle trail. However by the 1820's, numerous Anglo immigrants began to utilize the trail from Nacogdoches to new settlements further west. Moses Austin traversed the trail en route to San Antonio to request an empresario grant from the Spanish government in 1820, and many Anglo-American colonists entered Texas at Gaines Ferry on the Sabine River, arriving at Nacogdoches and the interior of Texas Parts of these roads were not only used for travel, they also formed some of the earliest political boundaries, such as separating land grants, and later, becoming county lines.

The El Camino Real de los Tejas provided access to armies on the move, including Spanish, French, Mexican, Republic of Texas, and American, and helped determine the southern and western boundaries of the United States and Mexico. Thousands of American immigrants into Texas arrived via a section of the camino real known as the San Antonio Road. Their presence and activities led to the revolt against Mexico, and to Texas independence and eventual statehood. 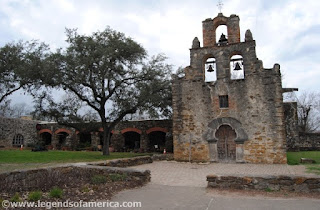 of the San  Antonio missions,

Constituting the only primary overland route from the Río Grande River to the Red River Valley for more than 150 years, the trail not only served as a conduit for exploration, trade, migration, settlement, but also as an agent of change. Connecting cultural and linguistic groups, the pathway fostered a mix of Spanish and Mexican traditions, laws, and cultures with those of Anglo-Americans, resulting in a rich legacy reflected in the people, places, music, and arts of Texas and Louisiana today.

After Texas independence the road fell into disuse as the greater emphasis was on north-south routes. Courses shifted to accommodate the growth of new settlements and new markets, and to provide access to coastal trade. Shortly after the Mexican-American War, the Old San Antonio Road, regained some of its former importance as potential prospectors flocked westward during the California gold rush.

Later, during the Civil War, the road served as a significant route for transportation of troops and supplies. After the war large segments of the route were abandoned in favor of newer, shorter roads that linked the growing cities of  Texas. In the latter part of the nineteenth century when the railroads barreled through Texas, almost all of the roads were abandoned except for local transportation. However, later highways would follow similar paths, including I-20,  U.S. Highway 59, and Texas Highway 21.

In 1915, the Texas Legislature appropriated $5,000 so that a survey could be made of the Old San Antonio Road through Texas and the Daughters of the American Revolution soon erected pink granite markers along the old trail. On the 300th anniversary of the old road, in 1991, the Old San Antonio Road Preservation Commission was formed to study the historical and archeological evidence along the old route. 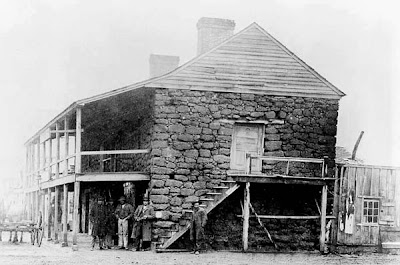 La Casa Piedra (later known as the Old Stone Fort) was built by the Spanish
in 1779 as the first mercantile house in Nacogdoches. In 1902, it was dismantled,
the stones saved, and the fort reconstructed on the campus
of Stephen F. Austin State University. Photo 1885.
Posted by The Savage Roads at 6:15 PM No comments: Links to this post

The Mann, the myth, the legend...David Mann

Who is David Mann? The MANN who single handily defined and captured the outlaw chopper
lifestyle in paint and is most well known for his prints in each issue of Easyrider Magazine, starting
in issue 3 and ending in 2003 due to health. 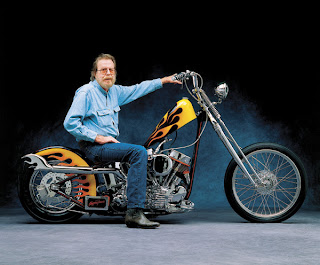 The wild lure of the West Coast drew him and buddy Al Burnett so they peeled rubber to Santa Monica
California. While cruising the seaside community he stumbled across Bay Area Muffler and there he
discovered completely insane chopped Harleys. Dave was immediately hooked, much like the rest of us.

He returned home to buy his first bike, a 1948 Panhead. At the same time he created his first artistic
creation, “Hollywood Run.” 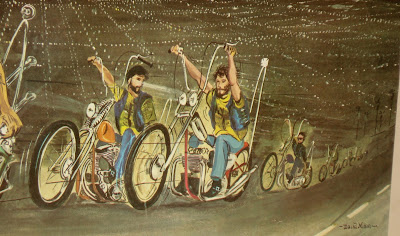 It represented the wild, unleashed, Hollywood outlaw lifestyle. Riding his Panhead with his first
painting tucked under his arm, he entered the 1963 Kansas City Custom Car Show.  That car show
launched Dave’s artistic/biker career. He had the only custom-bike entry in the show, so for his creative
efforts the judges initiated a new class and trophy specifically for Dave. In addition, a Sioux City, Iowa,
club member named Tiny noticed Dave and took him under his wing.  Tiny took a Polaroid of his first
painting and sent it to the eccentric Ed "Big Daddy” Roth, the California custom car creator and
publisher of the first chopper magazine. Dave painted several posters for Big Daddy Roth.  In 1965,
David went to work for Dave Poole, who taught him the precise craft that Dave has incorporated
into his fanciful art for the last 30 years.

In 1971, Dave discovered a new magazine with a twist—Easyriders!  It was the first full-fledged,
lifestyle-related bike rag. Since the third issue, Dave has followed—and in some aspects led—the industry
by capturing the essence of a changing lifestyle on the center- spreads of Easyriders.  Regarding the future
of custom bikes, David said, “I see many builders going the way of the full-fendered bikes, and I love
‘em. But, like you, I will always be a chopper rider at heart.” Sadly, in 2004 David passed but he will
eternally be remembered for defining the chopper scene so perfectly. 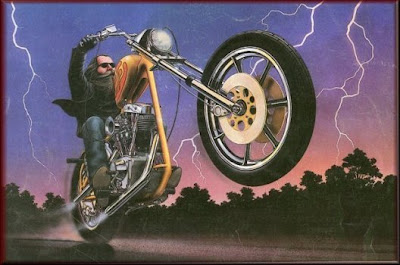 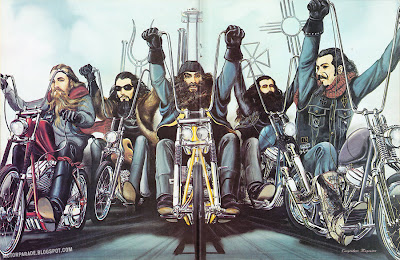 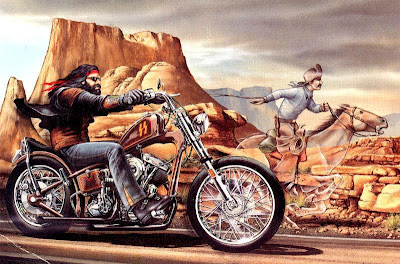 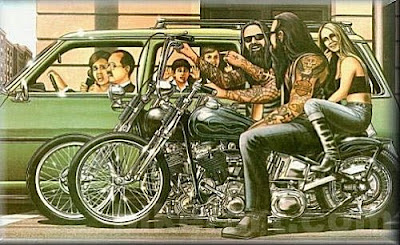 References: www.davidmannart.com
Posted by The Savage Roads at 4:58 PM No comments: Links to this post

Promote Your Page Too 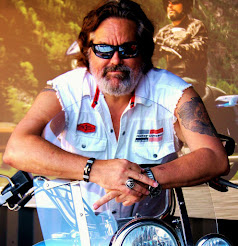 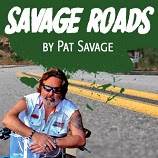 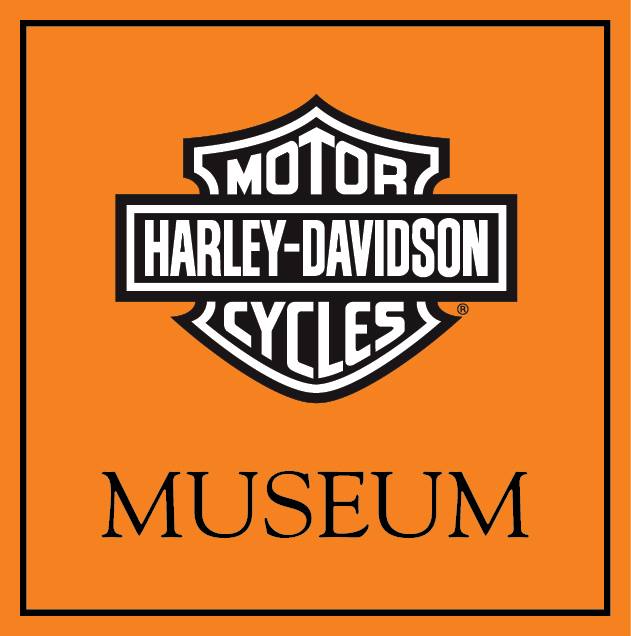 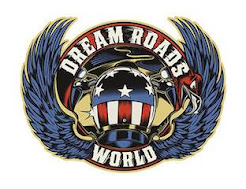 Ride free with DREAM ROADS for an experience that will change your life. 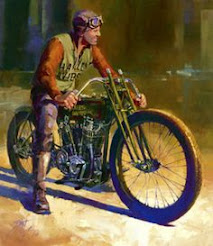